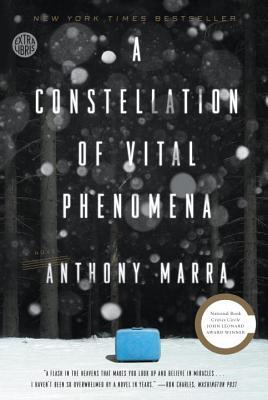 This year I’ve read both of Anthony Marra’s books, The Tsar of Love and Techno and A Constellation of Vital Phenomena. Both works were on so many ‘Best of’ lists the years they were published that I was wary, but I needn’t have worried. They both live up to the hype, especially The Tsar of Love and Techno, a series of linked stories set across the former Soviet Union (Chechnya, a Siberian city called Kirovsk, Leningrad/St. Petersburg) that move between the Soviet era just before World War II to near present day. Recently I saw someone on Goodreads say about a book that the best way they could share how much they loved the work was simply to quote from it extensively. This is exactly how I felt about The Tsar of Love and Techno, and to a lesser extent A Constellation of Vital Phenomena, which was Marra’s debut novel, as I seemed to find myself highlighting some turn of phrase or passage on every other page. In fact, I underlined so much that the best way for me to share my feelings might simply be to hand someone the entire book. I’ll admit that A Constellation did drag a bit in places; it’s more bleak than The Tsar, dealing exclusively with the aftermath and devastation of both the First and Second Chechen Wars for a small group of characters. A Constellation covers only five days in the present but moves across time to share the lives of the principal characters. In both books the characters are connected either as family or friends, or by history or direct circumstance, and at times by all of the above. Some of these stories take too long to tell, the suspense building not to a bang but a whimper that can leave the reader feeling that the time spent on something that the plot reveals as inevitable might have been better spent on another character, another story. This is why I think The Tsar is better: Marra seems to have honed these connections, to have figured out exactly how much to tell in one place so that later, when a small but significant detail from an earlier story appears as a major element in a later one, the reader feels the power of the mystery of coincidence. There is much less of a feeling of “of course” and more of a sense of wonder at the ping and response of human activity across time. 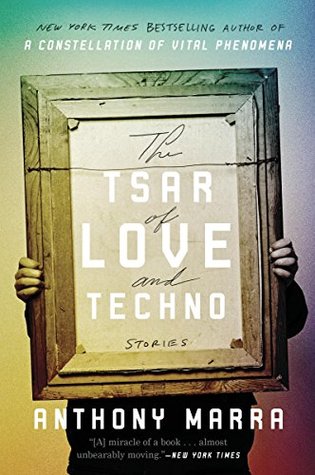 Two things I loved in both books. First, the humor, which I completely did not expect. A Constellation has its fair share, especially when it brings together two of the primary characters, Akhmed and Sonja. He is a mostly incompetent village doctor who would prefer to be an artist; she is a talented surgeon who studied in London but returned to Chechnya for complicated reasons having to do with her younger sister. At the beginning of the novel, Akhmed brings a  child, Havaa, to the hospital where Sonja works, hoping that as a doctor Sonja will agree to take the homeless child into her care if he agrees to help her manage patients in the hospital. To test him, she asks what he would do with an unresponsive patient brought into the emergency room. He  responds that he would give the patient a questionnaire:

She had asked what he would do with an unresponsive patient, and he, in a blundering moment, had taken it to mean quiet or unwilling to talk , and had thought of the mute village baker, who communicated only through written notes—which had proved problematic the previous winter when the baker suffered from a bout of impotence he was too ashamed to write down, even to Akhmed. Akhmed had resolved the problem—shrewdly, he thought—by giving the mute baker a questionnaire with a hundred potential symptoms, of which the baker checked only one, and so had saved the baker’s testicles, marriage and pride.

Marra is highly adept at using humor to bring levity to the darkest moments. Although occasionally slapstick, this humor is often the most complicated kind, pulled from moments of misunderstanding or desperation to remind us all that the human condition is equal parts comedy and tragedy.

The second thing I love is a small thing: how Marra tells us something significant about even the most seemingly insignificant characters. For example, a man in A Constellation who is brought in after hitting a land mine:

The man, and he was a man, it was so easy to forget that with all his insides leaking out, had graduated from architecture school and had been searching for employment when the first bombs fell. When the land mine took his leg, he had already spent nine years searching for his first architectural commission. Another six and three-quarter years would pass before he got that first commission, at the age of thirty-eight. With only twenty percent of the city still standing, he would never be without work again.

I love this especially because it’s something I wonder about not even so much in novels as in real life, just passing people on the street or in the grocery store. These little glimpses make these bit players into something whole, give us a chance to see the detail framed against the bigger story.

A Constellation was Marra’s first book, but I recommend reading The Tsar first. I think they’re both worth reading and the quotes I’ve shared above are both from A Constellation, The Tsar is just…better. I’m not sure, but perhaps with A Constellation, Marra needed to write out all the blood and horror and betrayal to get some perspective, because it’s certainly the perspective piece of things that makes The Tsar the better book. And so, to convince you, I will leave you with a string of quotes (but I promise it’s not the whole book) from The Tsar. You’re welcome.

Radiographs of broken ribs, dislocated shoulders, malignant tumors, compacted vertebrae had been cut into vague circles, the music etched into the X-ray surface, the center hole punctured with a cigarette ember, and it was glorious to know that these images of human pain could hide in their grooves a sound as pure and joyful as Brian Wilson’s voice.

Yellow fog enshrouded the city like a varnish aged upon the air.

Despite inheriting her grandmother’s beautiful figure, Galina danced with the subtlety of a spooked ostrich.

You see, Kolya was a hundred meters of arrogance pressed into a two-meter frame, the kind of young man who makes you feel inadequate for not impressing him.

The Lenin statue once stood in the square outside this school, arm raised, rallying the schoolchildren to glorious revolution, but now, buried to his chin like a cowboy sentenced to death beneath the desert sun, Vladimir Ilich waves only for help.

I fear for her future in a country whose citizenry is forced to assemble its own furniture.

Then she’s gone and I’m left alone with the assistant whose saccharine perfume smells of vaporized cherubs.

The megalopolis in his mind has quieted to a country road. He does his work, he eats his bread, and he sleeps with the knowledge that today hasn’t added to the sum of human misery. For now at least it’s a peace of a kind he hadn’t imagined himself worthy of receiving.

Kolya entered the chorus with an orchestra of punch-drunk madmen living in him, belting the tune to the velvet yellow, to the misting lake, to the carcinogens no song could dislodge from his capillaries, and in this amphitheater of decimated industry, on this stage of ice and steel, he taught the granddaughter of a prima ballerina to dance.

The strip of concrete, scabbed in gray forest, stretched to the intersection where it linked with another sidewalk, which in turn intersected with another and another, circumscribing the limits of her life. How often had she walked down them silently? How often had she censored her thoughts, her judgments, her beliefs, her desires, consigning them to some region of her soul where they couldn’t betray her?

Took a long time to understand the American mindset. The fear of their cruel and capricious government weighs heavily on their psyches. They’re more inclined to believe they’ll lose what they have than receive what they want.

7 thoughts on “Reader’s Journal: Why you should read Anthony Marra (if you haven’t already)”

There was an error retrieving images from Instagram. An attempt will be remade in a few minutes.