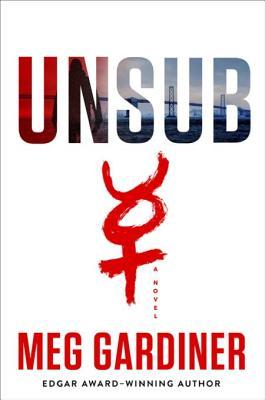 I could say that I picked up Meg Gardiner’s UNSUB on a whim, but that wouldn’t be exactly true. For one thing, I read her first book, China Lake, back in 2011. That was the first in her Evan Delaney series, and the only one I read—not because I didn’t enjoy it (I did!), but because I’m generally too interested in a different next book to get to the next one in a series right away (or ever). I had just discovered the Edgar Awards and along with it some favorite new authors. I decided to read Meg Gardiner because I liked her, or more specifically her blog, Lying for a Living. But then, to tell the truth, I kind of forgot about her. If I tell you that up until last week I had 674 books on my Goodreads “want to read” list, I think that’s explanation enough.

But why UNSUB? Why not just the next in the Evan Delaney series? I guess because I was in a serial killer kind of mood. Is that a thing? In truth, I didn’t read the description all that closely, and I thought it was a book about a father-daughter investigative team that was obsessed with the Zodiac Killer. Close, but not quite. Mack Hendrix is an ex-homicide detective who was driven into retirement after his obsession with a serial killer called The Prophet drove him close to the brink of madness and killed his partner. Caitlin Hendrix is a cop like her old man, working in narcotics when she gets called to the scene of a grisly murder on the outskirts of San Francisco. It’s clear from the crime scene that The Prophet has returned, and Caitlin is determined to be a part of the investigation. That’s where the thrill ride starts, and Gardiner never lets up, even for a second. The story is expertly plotted and paced and highly entertaining to boot. It took me two days to read it, but if you don’t spook easily, you could probably get through it in one sitting. (Actually, if you do spook easily, one sitting might be better, like ripping off a bandage.)

Earlier this year I read Michelle McNamara’s fantastic I’ll Be Gone in the Dark about her obsession and hunt for the Golden State Killer. As it turns out, the GSK prowled and terrorized the Santa Barbara neighborhood where Meg Gardiner lived as a kid, the creek he used to slip quietly through neighborhoods running nearly alongside her family home and the homes of her friends. Echoes of that killer’s crimes appear in UNSUB, as does the terror he caused in the communities where he committed crimes. Gardiner also pays some homage to McNamara’s work in reminding the reader that back in the day, county agencies handled their own investigations, so often they had no idea that the serial rapist or killer in their midst was wreaking the same havoc in other nearby counties. Today, California has a sophisticated DNA database (thanks to a family member of one of GSK’s victims), and we are all linked by the internet—something Gardiner uses to the killer’s chilling advantage. Caitlin also receives help from an amateur sleuth who helps to run a forum called FindTheProhet.com, giving a nod to all those people who work earnestly and tirelessly (and maybe a bit obsessively) to help resolve long unsolved crimes.

I bring up McNamara’s book because in misreading the description for UNSUB and then adding it to my TBR, I assumed I was going to get a novel based on the same type of characters, regular people haunted by and driven to solve a mystery. And instead I got a combination crime thriller/police procedural, which aren’t genres I usually gravitate to, and I think for that reason some things in the book didn’t work for me. (This might get a little spoilery, but I’ll do my best not to reveal anything.) Let me preface this by saying that the problem is me and my expectations, not the book. Gardiner ratchets up the tension from the get go and never lets up, which I appreciated, but I like a slower burn. When The Prophet resurfaces, things escalate quickly over the course of a few days, and it all seemed to me…over the top. There are videos and hidden cameras and explosions and so on and so forth. There’s an elaborate finale in which just the right people are at the scene and lots of people are killed and…I know it’s wrong, but I kept thinking, really? Isn’t this a bit much? (But then I kept reading, because Gardiner is good, and I had to know what happened.) But maybe that’s the point. In fiction, strange as it may be, serial killers are entertainment, and we get to control them, and the point is to contain them, to catch the bad guys (although I am not saying she catches him; you’ll have to read it to find out). But for me it would have been just as thrilling if the end was Caitlin and team pouncing on The Prophet when he was coming out of WalMart with milk and toilet paper, maybe even more so, because that’s really the most terrifying thing of all. GSK, BTK, Ted Bundy…these people walk the streets, go to the grocery store and the mall and the Starbucks, send their kids to school, go to church. In 2016 a billboard went up along Georgia 400 near Alpharetta with a drawing of GSK and a number to call for any information of his whereabouts. And I remember thinking, because I had read McNamara’s original GSK profile in LA Magazine in 2013 (warning: the opening sketch alone will give you nightmares), “No. No way is he here. He’s in California.” But how would I have known? It was entirely plausible he could have crossed the country to get a fresh start. When my husband wasn’t home, I kept the doors and windows locked.

But anyway, back to the safe world of fiction: UNSUB is a terrific read, and lucky me, the second one, Into the Black Nowhere, is already out, and set in my home state of Texas. And I don’t think I’ll stop there.

There was an error retrieving images from Instagram. An attempt will be remade in a few minutes.